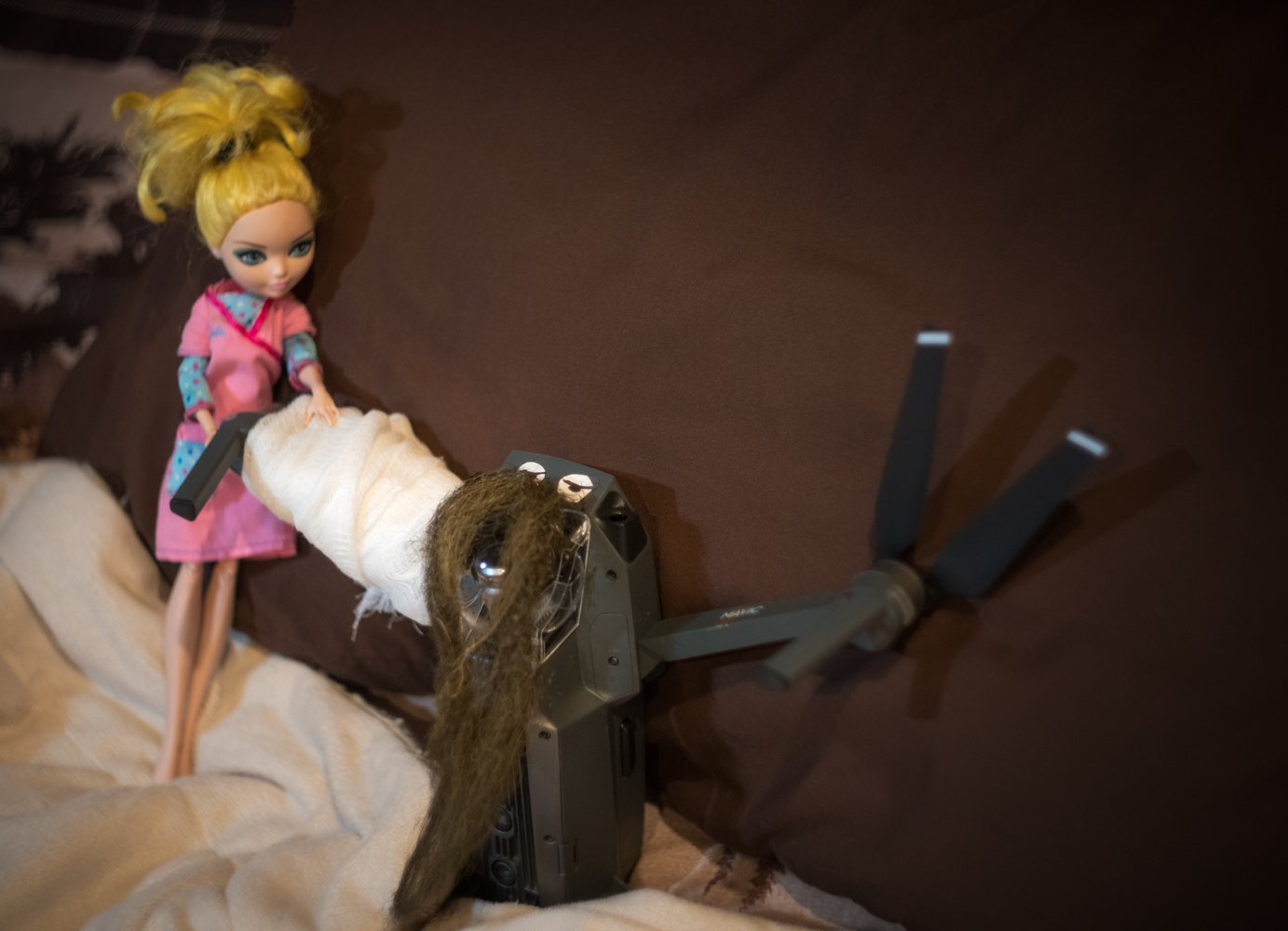 When I first unpacked my new DJI Mavic Pro, I was excited and couldn’t wait to try it out.  I think it was about 10 degrees out that day and the Mavic held up better than my frozen fingers.  Since then, I have got to know it better and wondering just how rugged it is and how much it could take.  With this question in mind, I developed an extreme

test for my Mavic.  I would crash it into the tallest tree on the other side of the thawing and rushing waters of the Clearwater river.  The second step was to leave it there in the weather for a full month and see how it could handle it.

Ok, so it wasn’t a planned test really.  Do you still wonder how well it survived, though?   You can be sure that I was wondering.  When the controller beeped, I had a mixture of shock and a sinking feeling of losing my new Mavic before I even got to fly it in decent weather over some ghost towns.  I was standing there on the steep river bank with my daughter.  I was watching the camera on my screen and looking up now and then to check where it was.  I was just about to bring it down and be finished when I decided to try one last shot.  I was going to fly upward and backward while revealing the river and surrounding rugged mountains.  It was going well until it wasn’t anymore.  I was almost high enough to avoid the really tall tree, but not quite. This picture shows the tree that maliciously grabbed my Mavic.  The controller beeped, I stopped and looked up to see it about 2 feet from the tree and then forgot that I was flying backward, so I tried to get away from the tree by pressing back on the stick.  The Mavic promptly lodged itself in the tree.  I tried to move everything to get it to drop to no avail.  After my initial shock, I tried to figure out how to rescue the Mavic.  The first obstacle was the freezing water of the Clearwater river.  There is a bridge about a mile down river around the corner, but the banks of the Clearwater are steep.  In between the bridge and this area, the bank is actually a sheer cliff that is impassable without getting in the water.  The same problem exists upriver also.  The second obstacle was the fact that the Mavic was near the top of a really tall tree.  Eventually, I gave up and went home.  I messaged my craziest friend to see if he wanted to go tree climbing.  You know that adventurous friend with no fear?  Most people have one, but mine said he was too old to climb trees now.  So, who else might do it?  Maybe a logger?  Luckily, that night we had a huge wind storm and that problem was taken care of.  When I went down the next day to see if the Mavic was still in the tree, it was not.  This made a new problem, I couldn’t see it on the ground.  That didn’t absolutely mean that it went in the river because there is a lot of brush on the ground that it could be hiding in.

So, back to the first obstacle, how to get across the river.  Josh, my crazy friend, came down and helped me strategize.  We decided that there was a skinny part of the river just upstream that we could possibly put my extension ladder over like a bridge.  We tried that the next day along with Josh’s brother Bill (who is also my son-in-law) and my son Aaron.  We tied one rope on each end of the ladder.  The bottom rope was also tied to a tree so that we wouldn’t lose the ladder.  We used the top one to lower the ladder across the river.  When the ladder bridge was nearly in place, the raging river grabbed it and actually bent it around a boulder.  I didn’t know that fiberglass bent like that.  It didn’t break, though, so we pulled it out and scrapped that idea.  The only way we could see to do it was with a raft.  We went home and grabbed a raft and tied ropes to it.  Josh tried going across near the crash, but the water was swift and we had to pull him back.  Undaunted, we went upriver to a calmer spot and I tried to cross.  The plan was to tie the raft on both sides and make a ferry.  I made it across and was trying to grab a rock to get out.  This is when the rushing water going around the rock tried to steal the raft and I fell into the freezing water.  Oh yeah, just to add insult to injury, we had acquired an audience of fisherman just as I started across.  Several people have drowned in this river, so the fisherman thought we were crazy or stupid.  Well, I was on the other side and soaked.  The raft got away from me, but they had it on a rope on the other side so Bill came across to rescue me.  Even though I was wet,  we decided to try to walk down to the crash site.  We walked and climbed through the snow and over boulders but came to an impassable area right before the site.  Being wet, and having people watching us, I decided to give up and we went back across and went home.

Over the next month, we had some of the worst snow, wind, and rain that we have had in a long time.  I saw a YouTube video where a guy was really rough with a Mavic Pro and it kept surviving it just fine.  This gave me hope, in the case that the Mavic was not swept down the Clearwater.  We went down a couple more times and tried to spot it, but we couldn’t see it with binoculars or my camera.

I had crashed the Mavic on February 10th.  On March 12th, Bill and I decided to give the raft idea a try again.  When we got there, there was already a fisherman close by, but he was around a corner.  Seeing how fast the river was moving, I was hesitant to try, but Bill said we should at least look.  He agreed to give it a try.  On the first try, we ran out of rope because the river pulled him quickly downriver from me.  As I was pulling him back, some guys came by in a pickup and stopped to yell something about him being dumb out there in the river or something.  We couldn’t really hear them and waved them on.  It took two more attempts for Bill to get across.  He landed in the perfect spot and commenced the search.  Within five minutes he found my rugged mountain Mavic tangled in some brush near the base of the tree that caught it.  He held it up in victory and we had a little cheer.  It looked pretty whole from my viewpoint.  Here is a video of Bill right after he found it.

Inspecting my Mavic, I discovered that the extent of the damage was one chipped blade and the hinges on the blades were all a little stiff.  There was also some moss stuck here and there and some condensation formed on the inside of the camera lens from bringing him inside and getting him warmed up.

I had some extra blades from my initial purchase, so after installing them we tested it out.  I forgot to mention that my water resistant cell phone stopped working after I fell in the river, so on this test video, we had to pause to do some app setup on my new phone during the test.

So, after my extreme test, I conclude that the DJI Mavic Pro is a very rugged and capable machine!  I’m pretty sure that I would be in a lot worse shape if I spent a month out in the forest in that weather.  I will be a lot more careful flying it from now on, though.  If you want a drone, buy this one!  The Mavic is not only tough, it records awesome cinematic 4k video and it folds up ridiculously small and portable.

In the featured picture, you can see that my Rugged Mountain Mavic was getting some much-deserved attention and bed-rest.  He grew quite a “MOSS-stache” while surviving out there!  I need a tough guy name for him now I think.  What would you name him?  Please comment your answer in the comment section at the bottom of this page!

Here’s the video I was recording when I crashed it.  Right at the end of the video is when it hit the tree.  I turned off the recording when the controller alerted me, though, so no video of the crash.  I was experimenting with recording in D-Log with this video and had to do all the toning in Adobe Premiere.  That was a ton of work that I don’t think I like, and I need to get better at before attempting again.