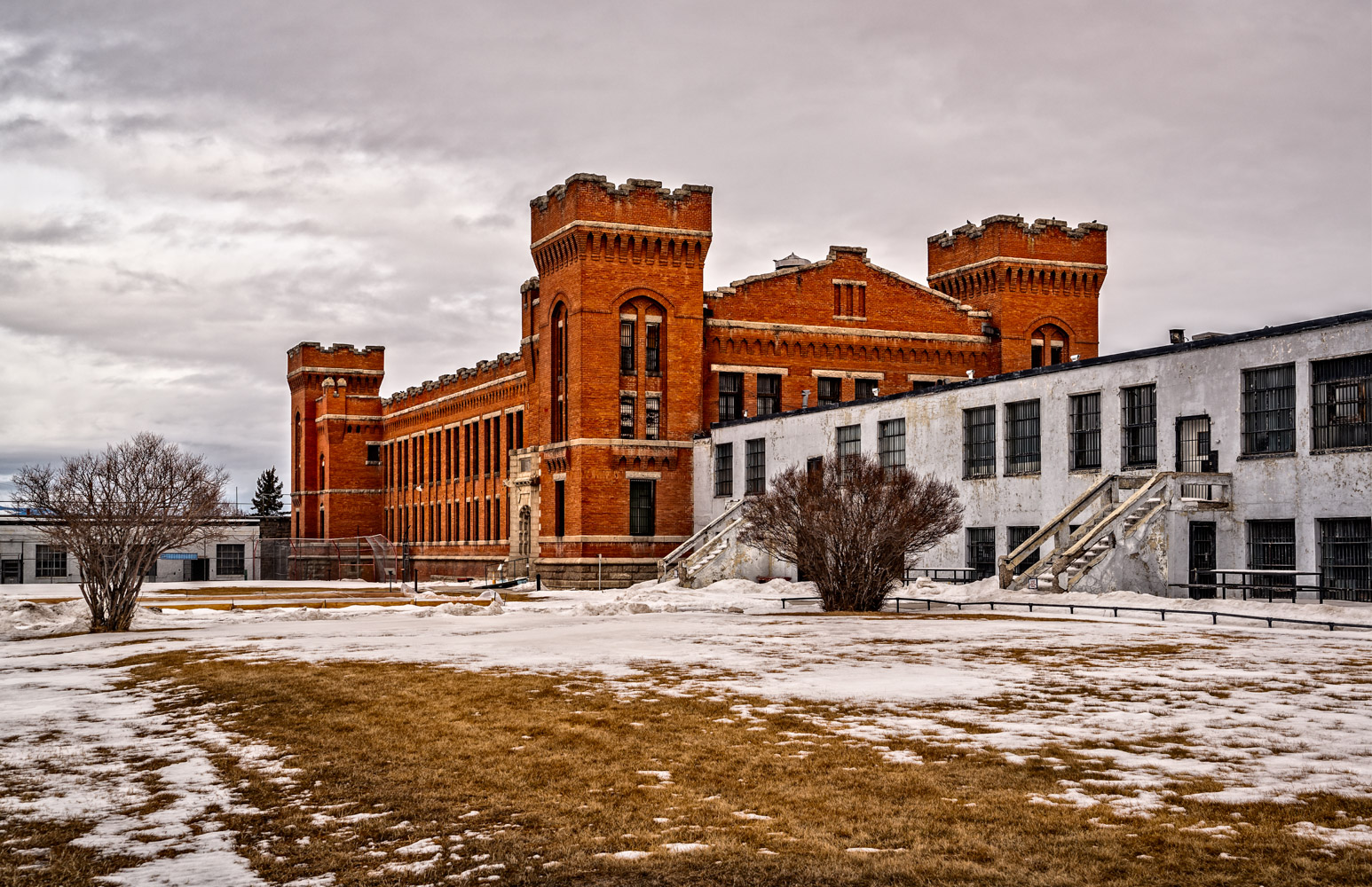 I’m no stranger to the Old Montana State Prison.  You see, I’ve been there a couple of times before.  This is the first time I’ve been inside since I started writing this blog, though.

I even spent some time in there, a few years back, with my Dad and my son Aaron.  In fact, this is one of my favorite places to visit.  Alright, I guess that’s enough joking.  I was never actually an inmate in any prison, but I do enjoy visiting the historic old prison and auto museum in Deer Lodge Montana.  Once you pay your admission, you can walk around through the various buildings on a self-guided tour.  The architecture is really interesting and reminds me more of a European castle than a frontier prison.  The original building from 1871 and is no longer there.  They built the massive sandstone wall with convict labor in 1893 to replace the wooden fence.  It extends 4 feet below the ground also.   This shot of the wall shows one of the many historical signs that the museum has around the premises.  This is where George Rock was hung for a failed escape attempt in 1908 by him and William Hayes that left the Deputy Warden John Robinson dead and Warden Frank Conley with 103 stitches on his back and neck. 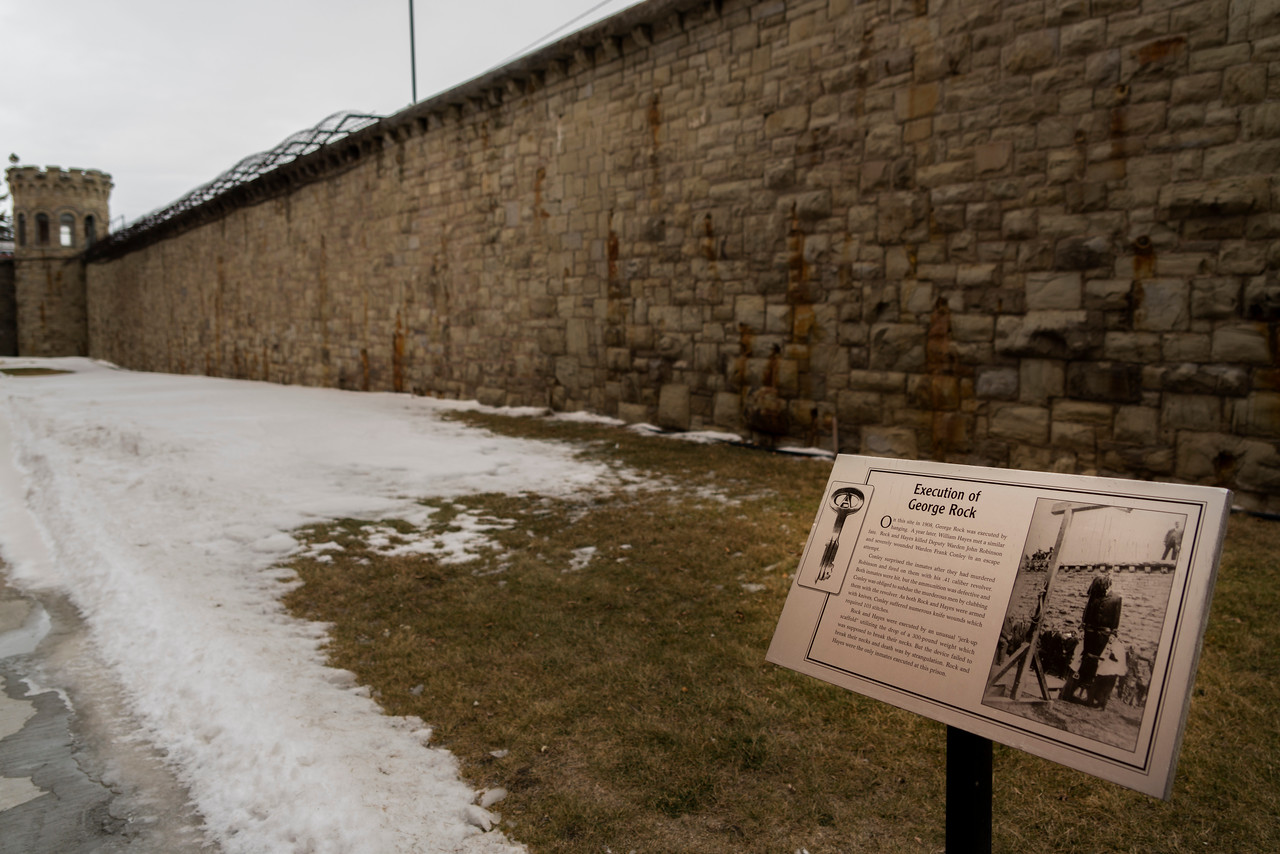 In fact, the convicts made the bricks and built the 1912 cell house, the maximum security building, and the W.A. Clark Theater.  They also built eleven buildings at the Montana State Hospital in Warm Springs, several homes, and 500 miles of roads.

This was the first time I had visited in the winter.  It was around 40 degrees outside and felt nice and warm compared to the harsh single digit weather we had been experiencing this year.  That changed as I walked into the cell house.  The heaters were not being used and the thick walls really hold the cold in.  The temperature must have dropped 20 to 30 degrees inside there.

This shot of “East Siberia”, where they held difficult prisoners separate from the general population, shows just how cold it was that day.  Notice the frost on the door and walls.

I also used my Ricoh Theta S camera to take some 360-degree panoramas.  Click and move the picture around with your mouse, or move your handheld device, to see all around. 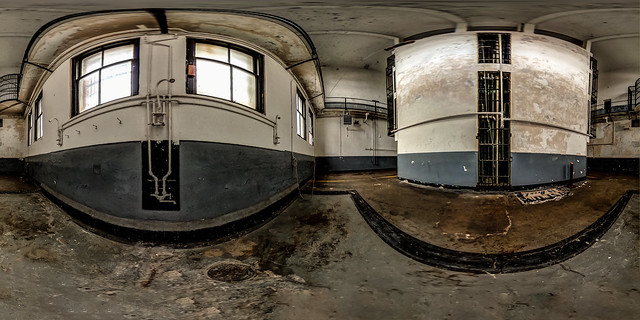 Here is the FOLDER on Flickr to view several more 360-degree photos!

In the theater, the museum has a gallows on display.  They called these galloping gallows because they would disassemble the gallows and move it where they needed it.

On the other side of the gift shop is an awesome collection of over 150 old cars and trucks.  It is listed by USA Today as one of the top 10 auto museums in the country.  There’s something for all car lovers in here.  Here’s a few of my pictures.  Please check out my Full Gallery of over 50 pictures of this awesome museum!

This place is sensory overload!  Across the street, they have made an old frontier town display and a toy museum.  They even have a couple of old train engines on display.  If you are looking for hours of fun in Montana, this is it!  I highly recommend going to Deer Lodge and checking out these museums.  Here is the Website for the museums for more information.