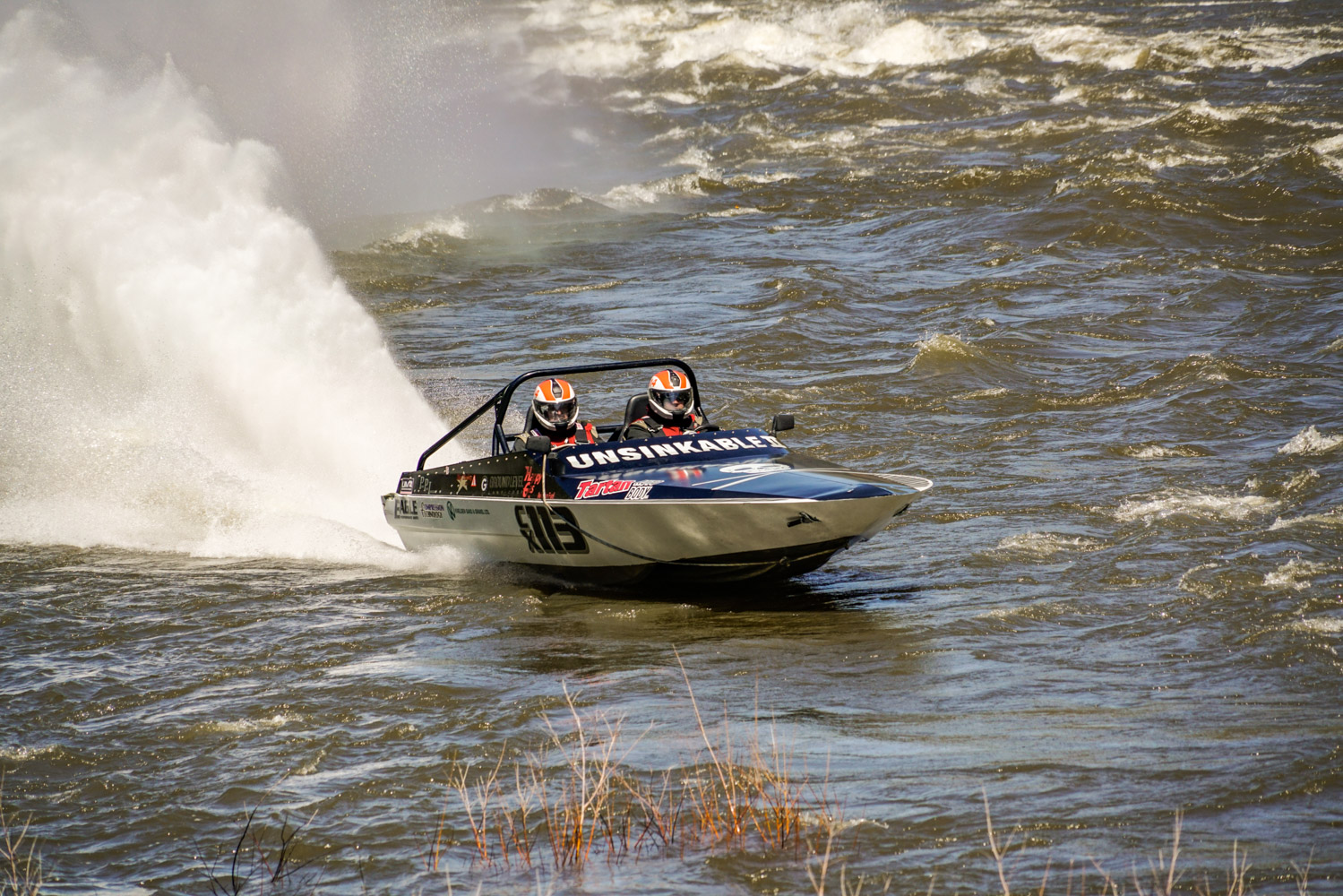 Recipe for fun:  1 part wild and scenic raging river, 1 handful of insanely powerful jet boats, 1 bunch of power hungry gear heads, mix it all together every April and enjoy.

It had been a couple of years since I had gone to the Salmon River Jet Boat Races and I had a craving for some loud and fast action, so my daughter Cassie and I ventured down to the tiny Idaho town of Riggins and found us a spot on some rocks on the banks of the “River Of No Return.” Finding a spot was a bit difficult since there were tons of people out with their ice chests and barbecues all along the banks, and even packed shoulder to shoulder over Time Zone Bridge. This bridge on Highway 95 is where the time changes from northern Idaho (Pacific time) to southern Idaho (Mountain time). Riggins is a town nestled in the Salmon river canyon and is much longer than it is wide because of that. I recently learned that the Salmon river earned the name “the river of no return” from the sweep boats that would supply the mining areas along it. These rugged men somehow made boats that could navigate the wild waters but could not make the return trip because of the currents and terrain. They would then disassemble the boats and use them as lumber. The Salmon river is still a tremendous force of nature, but man has again engineered boats that will not only go downstream but also upstream with about 1300 horsepower and lots of beautiful noise. You can hear the boats coming before they round the bend and brave the rapids. 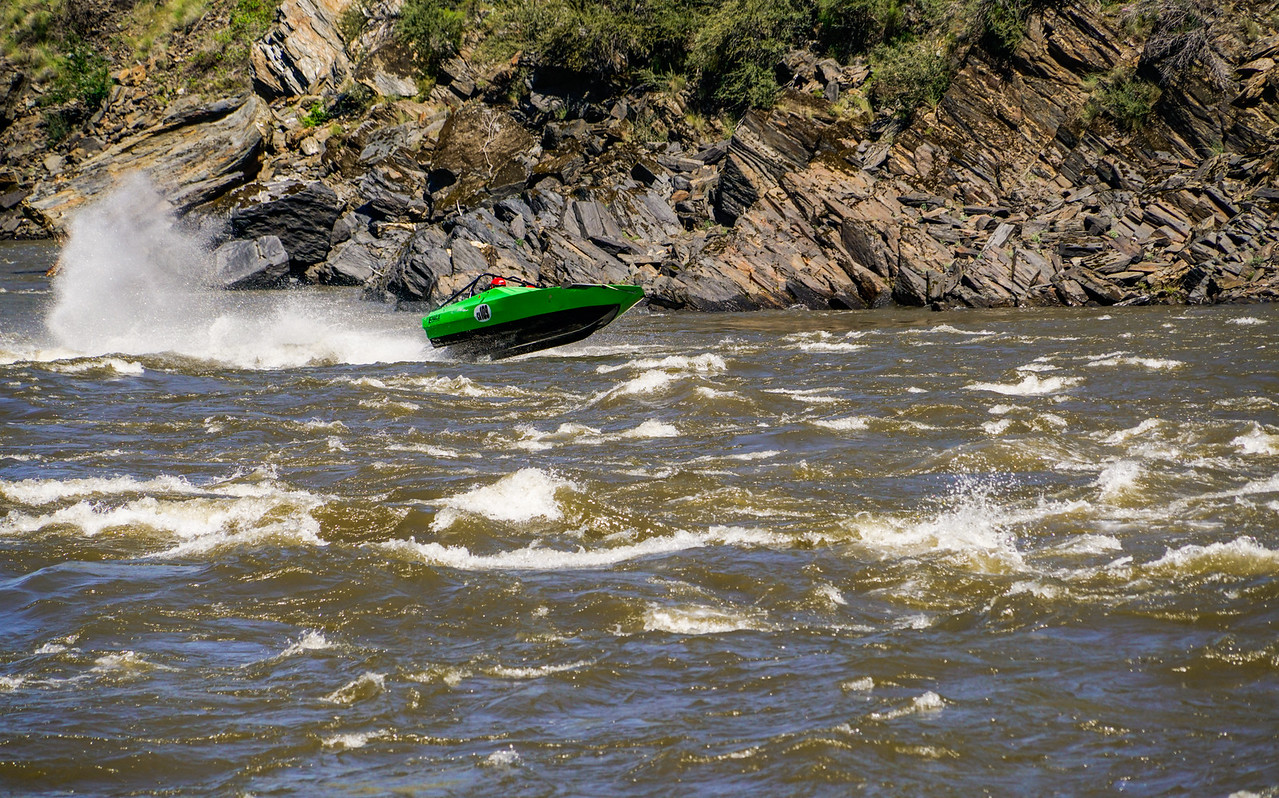 The teams make several trips up and down the river over the weekend and race against the clock. There’s no announcer and no charge to get in. The spectators just hang out with their family and friends for a day on the river with short intervals of excitement when the boats scream by. Boats have sank here before from the rough and fast flowing waters. I like watching them come upstream because they seem to get air born more coming up the rapids, but going downstream it’s amazing to see the speed and skill with which they shoot by.

I was using a fast shutter speed in continuous mode and was able to capture this boat right after it dropped over a huge rapid. It’s hard to see the boat in the second shot as it powers out of the rapids shooting a big rooster tail of water out. 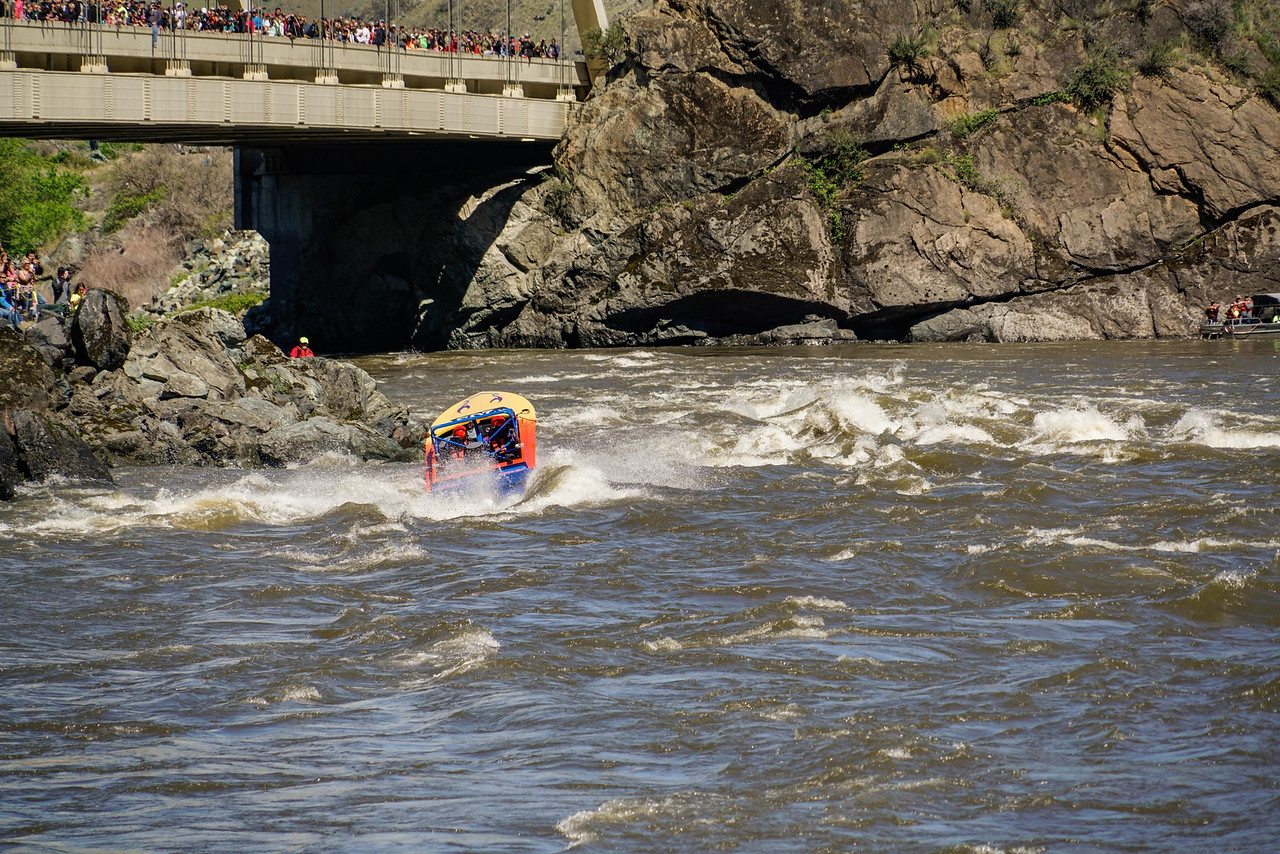 This last shot is one of my favorite. I didn’t realize it while shooting because everything happened so fast, but the navigator had his hands raised in a victorious pose.

Another highlight was seeing the jet turbine powered boat scream by sounding like a jet airplane. It was too fast for me to capture on the trip downstream, but I caught some video of it coming back up. It’s the first one in the video that is coming upstream. It’s hard to miss once it passes. I have a classic fiberglass jet boat with probably around 400 horsepower and I’ve only gone around 60 mph top speed on a lot calmer water. It’s rough, bumpy and a little scary. These guys reach speeds well over 100 mph in some crazy water.

Here’s a link to my FULL GALLERY of shots from that day.

Would you ride in one of these boats coming up the River Of No Return?